The term of influencer marketing represents the action of showcasing a product/service via individuals who gathered a large, loyal and in most of the cases valuable audience within various social media channels (Influicity, 2017).

The social media influencers are one of the most used sources, at this moment, which help your business growing faster and getting more profit. The price, which should be paid for the service of each influencer is different. It is based on platform and the size of the influencer’s audience.

The estimated price for the advertising of a certain product per post is calculated as follows:

Video influencers: $500 to $5,000+ per video. Here are the going rates based on influencer’s number of followers on YouTube:

There are several factors, which can help to indicate the approximate price for the service of a particular influencer:

– “Going rate” – the category or niche, where the influencer is placed regarding the type of content he produces for the existing social media channel.

– Reach (how many people follow or visit the influencer’s site or platform) (Dummies, 2017).

According to Kyle Wong, CEO of Pixlee and influencer marketing authority, you can measure influence with this equation:

One of the examples of the successful re-branding media campaign, which was developed with the usage of influencer marketing methods and techniques. The goal of Ribena was to attract the younger target audience to consume their product. In order to provoke a genuine interest in Millenials to get connected to the brand, they created a real pop-up coloring café, partnering with the artist Alex Lucas. The scenario is simple: by using the popular trend of adult coloring books, they asked visitors to contribute to a ‘colorful experience’ by coloring in an illustrative wall tile. The Ribena marketing team formed the strategy of approaching three different types of influencers with the goal of creating awareness about their product among young people. First of all, they asked the famous high-profile TV personality and well-known vlogger Giovanna Fletcher to take part in their promotional campaign video; recruited Confetti Crowd, a group of all-girl Instagrammers on a mission to support female empowerment; additionally, they invited 30 micro-influencers on Instagram. All the influencers were asked to create some quality content for the campaign and share it with their audiences (Flockler & Oy, 2017).

All the participants in the café have to color an illustrative tile in their own way. As the final result of the coloring process, each person has to stick the tile to the wall in a specific pattern order. After the canvas is finished, the fun part starts: the light is going off and the various figures characters, which were formed with the tiles, start to enlighten and sparkle along with the rhythm of the music. The overall idea of the video was about recreating the atmosphere of the dance floor and add up in there some DJ vibes. The atmosphere and overall impression of a positive and fun video will provoke interest in the younger target audience to buy this product. Buying Ribena drink makes you fun like all the influencers from the ‘colourful experience’ video (“Colouring Café – Ribena”, 2017).

The results: According to Ribena’s senior brand manager, Emmeline Purcell, who spoke at the recent Festival of Marketing event, the campaign generated 120 pieces of content, attracted 66,000 visitors to its site and the brand’s perception score went up by 10%; they even attributed the 6% rise in sales of Ribena Light to the use of influencer marketing (Flockler & Oy, 2017).

The well-known brands such as Gap, the high-street fashion retailer, picked up the new wave of advertising by establishing a partnership with some influencers. The Gap team decided to refer to the power of bloggers in order to create an online fashion platform, where the brand style is introduced to the audience in daily blog posts. In the project, there were involved such bloggers as Refinery29, Jamie Bauer, and Milli Midwood – who use and feature Gap’s clothes in their articles. The photo of the blogger wearing Gap product is redirecting the visitor to Gap online shop in order to purchase the same item which is featured on the photo. In order to maintain two-way communication, Gap introduced the hashtag #styldby which can be used by fans to post their own content on social media channels. The idea of using the power of social media and bloggers, as the representatives of a brand high-street fashion image, is simply smart and easy to implement. Targeting the right influencer group and using a suitable strategy to spread the message about the brand is the key to the successful campaign.

Results: By partnering with bloggers and fashion influencers, Gap has been able to increase its reach exponentially. Just one of the fashion bloggers, Refinery29, has 969,000 Instagram followers that they’re sharing their posts with on a regular basis (“styld.by”, 2017), (Flockler & Oy, 2017).

A number of people, who refer to social media channels for customer support regarding questions or problems with the service, was growing gradually over the past year. According to the Sprout Social Q2 2016 Index, in Q1 2016, the average number of social messages needing a response grew 18% year over year. In order to improve the quality of customer support, many brands found a way to handle this problem with the usage of chatbots on social media channels.

At this moment the most popular platforms for chatbots usage are Facebook Messenger and Slack. For instance, Slack reaches the amount of 3 million active users per day during the working week.  The reason for that could be the easier integrations with third-party apps, the focus on bots and user-friendly interface (Yeung, 2017). On Facebook Messenger, chatbot automation is used to connect people more directly to businesses and automate their interactions, for informational or commercial purposes. Since the messenger is the most used type of applications, it makes it more attractive and popular to use for such purposes with the business-like approach (The Verge, 2017). 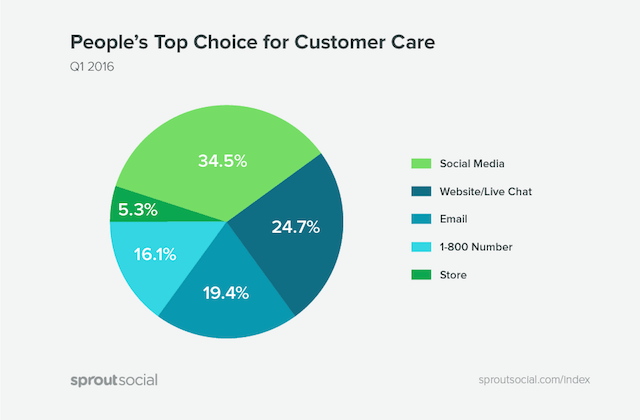 It is possible to set up the automation with ready to use frequently-asked questions templates or more extended information about the products. The advantage of chatbots is the reduced response time to customer’s messages comparing to live chat or average customer support platforms (Sprout Social, 2017).

At this moment Facebook is the leading social media platform for advertising. It is highly recommended to use this platform for promoting the products of the company with customized ads. Aiming your target audience is the best approach when you are willing to use Facebook for paid ads purposes. It is enough to set up basic demographics such as targeting gender, age, and geography. This approach allows reaching out to the most relevant customers who would be interested in purchasing the product of your company.

It is important to take into account the most suitable time for posting the content on your Facebook page. The level of organic reach on Facebook drastically decreased for the past year. In order to maintain the overall good level of reach on social media channels like Facebook, it is recommended to combine organic reach with paid social is the way of the future (Gallegos, 2017).

Along with the customization of paid ads, there should be set up the data analytics process. Several fields of online traffic measurements such as click-through rate, engagement rate, cost per click, geographic performance, and CPM are essential to use for strategic objectives in marketing.

The interest in live-streaming apps such as Meerkat and Periscope is dropping down. On the other hand, the new live feature on Facebook, Twitter, and Instagram is taking over the leading position.  You don’t have to underestimate the power of live video since one of the top-ranked activities on Facebook and Twitter is considered to be watching a video. In order to maintain the level of customer engagement in an era of ad-blockers, most of the advertisements could be featured with the use of live-stream (Hootsuite Social Media Management, 2017).

The live-stream is targeted at the younger audience, the mobile users aged 16-34. They are mostly encouraged to check the live-stream with breaking news stories (40%) and music concerts (38%), brands (26%), celebrities (21%) or vloggers (19%). The content of live-stream should be mostly entertaining or funny and at the same time grabbing the attention of the younger target audience (Globalwebindex.net, 2017). 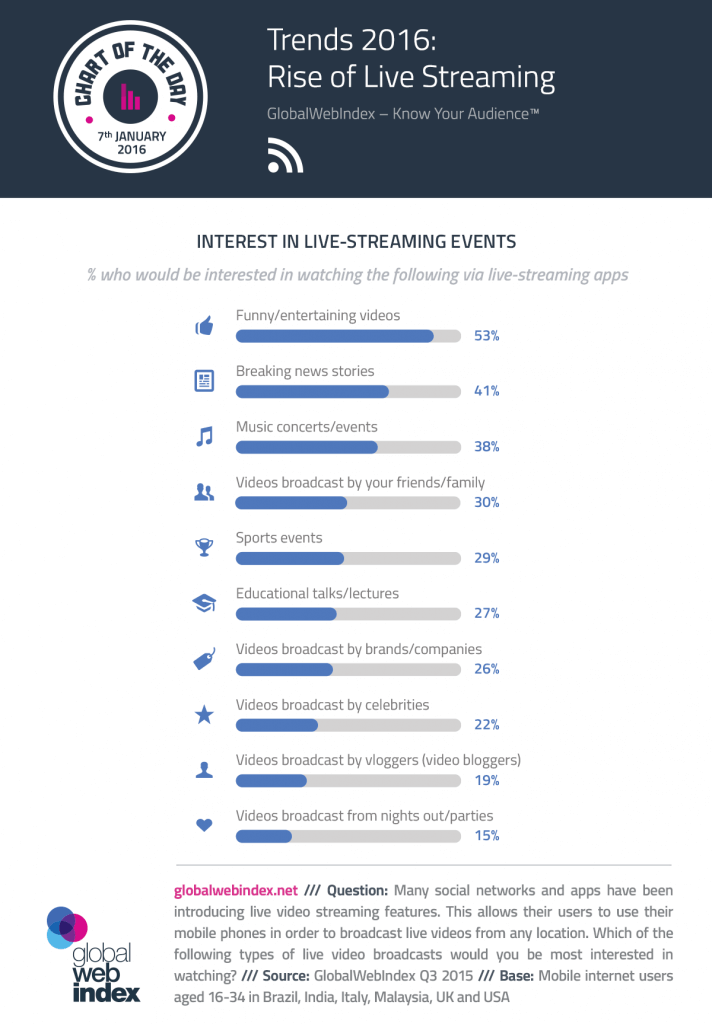 The advantage of using the live stream feature is the possibility to address the viewers in real-time and hear what’s on their mind, check out their Live Reactions to gauge how your broadcast is going (“Facebook for Business Influencers”, 2017).